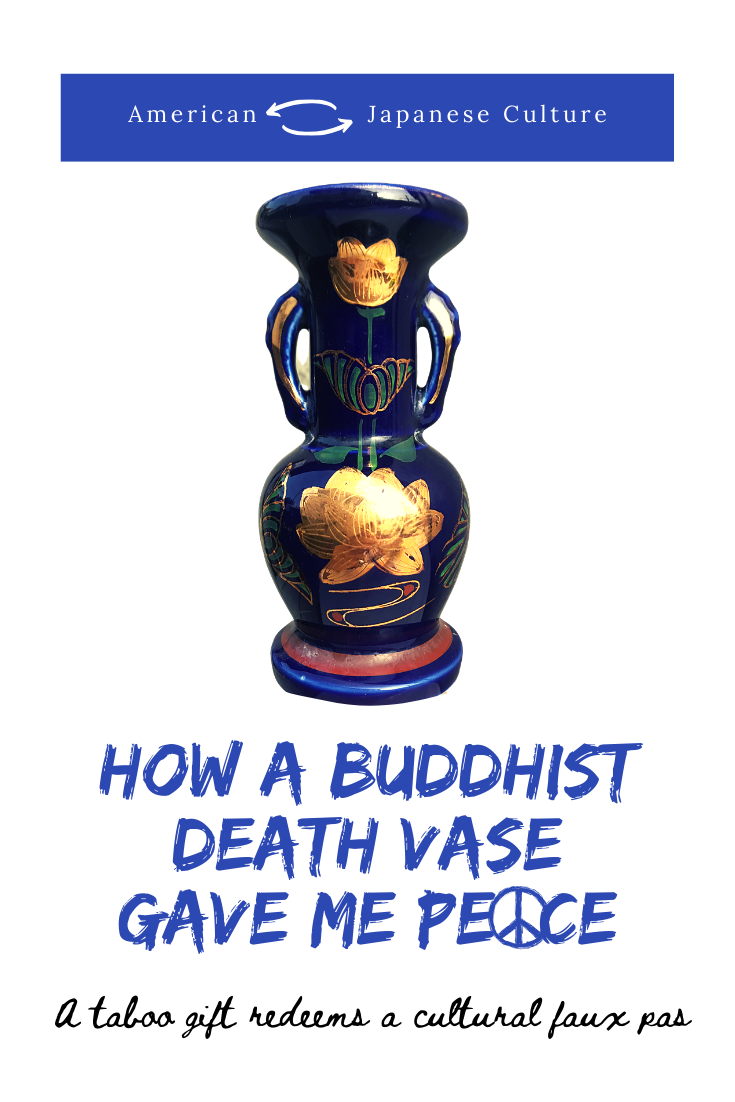 Life has come full circle. There is a completeness, and the story now has a happy ending.

Allow me to set the context:

An American student of mine, dutifully gave me a gift as his mother had told him to do.  As it is no secret that I love plants (as they adorn my classroom, and I cultivate the edible garden outside the cafeteria) I am assuming that this gift was a thoughtful way of encouraging this passion of mine.

It was a vase of vibrant cerulean and scrolling gold motif. It also happens to be a 仏壇の花瓶(butsudan no kabin) or the vessel that sits on a Buddist alter in which flowers for the deceased are placed.

Without knowing the heart of the student, the intent of the mother, and only looked at this act through the lens of Japanese culture, the act could be seen as morbid nefarious aggression. I.e., The student wished for my death.

And yet, my reaction was laughter.

From an American lense, it’s a beautiful vase, and she wanted to give me a beautiful, thoughtful gift. This student had no idea what he was giving, the poor thing was just doing what his mom told him to do, and culturally she didn’t know what she had. I loved the gift. In fact, it might be the best tangible present a student has ever give me, but not for the vase’s merit itself. Unintentionally, they had just given me a happy ending to a painful past.

Allow me to put this context into context:

The first year I emigrated to Okinawa, Japan, my work visa was approved for three years. However, the contract I signed with the school was only for one year.

After a few months, I knew the school was not for me, but I would honor my contract and give the appropriate amount of time in advance for the school to find a new teacher.

The decision was excruciatingly painful to make.

One, because I believed in the mission of the school, just not its application.

Two, I loved my students (Like a first love, a teacher’s first group of students impact one deeply.).

Three, I could infer, based on the character of the principal (who was also my visa sponsor), that if I quit, she would call immigration to cancel my visa out of spite.

I was not wrong.

Before I could even explain how I intended to continue to support my students and the school. (I wanted desperately to revivify the library and garden.) She jumped up and spat, “I’m calling immigration!” I was deflated, but not surprised, and now the clock was ticking for me to find a new job with visa sponsorship before the Japanese government sent me back to America.

Allow me to put this context of context into context:

I had recently started dating my future husband at the time and I didn’t want to leave him, the country, or my students if I couldn’t find another job with visa sponsorship. Yet, I was willing to risk losing my relationship, home, and pupils, because that is how unhealthy the place was.

I try to be fair by looking at things from the principal’s perspective. I think she thought my visa and contract were one and the same and this discrepancy blindsided her. I know that she also had experienced much heartbreak with foreigners running out on her, and I believe it was this past hurt that blocked her ability to see that I was trying to be honorable, even on her side. I just needed to be so and do so in a different capacity.

I really miss those students and wonder often what happened to them. I wasn’t even allowed to say goodbye…

The next day, I brought my boss a bouquet of what I thought were “happy yellow flowers.” I put much thought into this gift as I wanted to be culturally appropriate. I researched the meanings of colors, and yellow in western cultures means friendship, and in eastern cultures, it is good fortune or money. (Friendship and good luck and money! The was the rare Venn diagram middle of positivity in both cultures!) I also knew from my Japanese culture classes that this particular flower is used as a symbol of the emperor, so I thought there was a royal aspect too. Plus, this flower is on everything from hello-kitty to kimonos and traditional art. They are even sold in grocery stores as garnishes! I thought it was a win-win-win-win!

My Japanese readers have most likely figured out that I am talking about 菊の花 (kiku no hana): the chrysanthemum.

While all the above is true, it is also true that these flowers are the ones offered to the dead on Buddhist altars, and while it is OK to have a depiction of the flower, to give the real ones as a gift is taboo. (I still struggle to wrap my mind around this.)

I know that my boss recognized that my intentions were innocent. I did not wish for her death. I also know that she used this incident as an excuse to demonize me. She would not accept the flowers, nor tell me why. I went in tears to my boyfriend, who explained the situation and took me shopping to get an appropriate gift of delicacy cookies. I brought the right gift the next day, professionally gift-wrapped, with an explanation, apology, and bow that I had rehearsed in Japanese with my boyfriend. She would not accept this either. I believe she wanted to hurt me as much as she perceived I was hurting her.

How does all of this add up to a laughing reaction to the vase gifted by my American student? It is this vase that the “taboo flowers” are put in and placed on Buddhist alters to honor the dead. Inadvertently, this student blessed me with the opportunity to accept his gift-giving intentions and enact the grace that I wish my boss would have done for me. In doing so, that student gave me the ability to redeem apart of the pain.

I will fill this life-giving death vase with plants that will grace my classroom and be quite the conversation starter to those who know that they are looking at.

Death does bring new life if one has the eyes to see it. The death of my time at that school brought me to the 英会話 (English conversation school), where I discovered my passion for teaching English as a Second Language. The death of my time there also revealed how solid my then-boyfriend-and-now-husband is in a crisis.

Have you ever committed a cultural taboo or had a memory redeemed? Please share.

Helping those who legally cannot help themselves.

“When foreigners eat sushi, it really is peace, isn’t it.”- Jichan, 92 #sushipeace


Love this, Kendra. Sorry for what you went through. I know what it is like to be hurt this way… So I am glad you found a nice opportunity to exercise grace. And congrats on your podcast. Miss you! 💞😘

How many languages do you speak?